UPDATE: I have received a few questions about battery drain from this app. The iPhone app uses the device’s native address book to detect unwanted calls. While the app performs daily updates of its spam information, the amount of data downloaded and the associated battery impact is neglectable. It is less than 50kb per update (sub 1 second).

In contrast to our iPhone App, the Whitepage Android looks up a phone number’s “reputation” in real-time. This requires even less data (only one number is looked up at a time). Even with this real-time lookup the ongoing battery and data consumption is extremely light.

A couple of weeks ago I received a phone call from Karen (my wife) at 7:35 a.m. — very early for her. She told me she had just received a call on her cell phone from “the IRS” demanding payment for overdue taxes or they would file suit. What a terrible way to wake up!

I immediately told her it was a scam phone call and she should block that number from ringing on her phone.

If you’re anything like me, you are receiving an increasing number of phone calls on your cell phone from unknown callers who don’t leave a voicemail. Is it a legitimate call that you should return? Or, is it a call from a spammer or telemarketer that you want to block?

The problem of receiving unwanted phone calls on your cell phone is getting worse. Fortunately, I have found some help in the form of a smartphone app from Whitepages.

I first heard about the Whitepages Caller ID app when they did a presentation at the semifinal round of the ACORD Innovation Challenge where I was a judge. I have been testing it for a couple of months.

The app is available for both the Android and iOS platforms.

The app allows you to know who’s calling. You can avoid unwanted calls with real-time spam detection, fast reverse phone lookup, and a spam checker dialer that warns you if you’re calling a number that’s associated with a spammer or fraud. 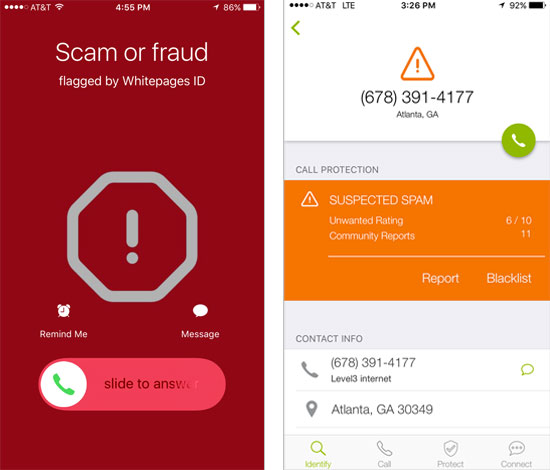 I have been using the iOS version of the app for a couple of months and am impressed with the information that’s made available. On numerous occasions an incoming phone call was flagged as spam by the app. I simply ignored the call and added it to my blacklist.

The Whitepages Caller ID app has a 4.5 rating in both the Google Play and iTunes App Store.

If you want to have better control over the calls coming into your cell phone, I recommend you install this app.

What have you found to be effective ways to manage scam, spam, and telemarketing calls on your cell phone? Let me know.