I have been experimenting for a while with various ways to take notes when out of the office. I’d like there to be a good solution for taking notes directly on my iPad. However, I am coming to the conclusion that pen and paper may be my best way to take notes, especially in meetings and listening to presentations. But while I like using pen and paper and it is often faster and more convenient, sharing my notes is limited and backing up means scanning the notepaper.

Livescribe’s latest smartpen bridges this gap. Livescribe has been creating smartpens since before the iPhone debuted. These pens record what you’re writing and hearing as you write. When you want to capture your notes electronically you simply connect the pen to a computer and offload the digital files for sharing and storage.

15% off any Livescribe pen

I’ve set up a special deal where you can get 15% off your purchase of any Livescribe smartpen. Just click here to get started.

Livescribe’s newest version – Sky Smartpen – allows you to sync your notes without actually connecting to a computer using a Wi-Fi connection. Like past Livescribe smartpens, the Sky is a bit large, about the size of an extra-large Sharpie, with a flat section along the backside so it sits flat on a desk surface. I got used to writing with this size pen fairly quickly.

Instead of using the proprietary Livescribe Desktop software, the Sky relies on a tight integration with Evernote. When you set up the pen with your Evernote account, a smartpen notebook is created. After syncing, you will find your notes in these notebooks. There is a separate Evernote notebook for each physical notebook you use. 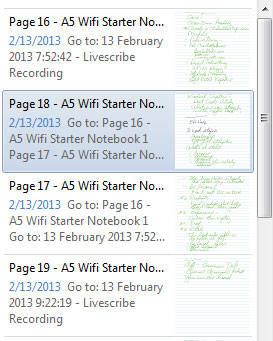 Handwritten notes sync to Evernote as an electronic document with the audio recording attached.

To capture your notes you will need to use one of Livescribe’s proprietary dot notebooks. You get one small notebook as part of your initial purchase. Additional notebooks are $20 for a package of four, containing about 200 pages in each. The pen automatically keeps track of what notebook you are using to write your notes.

I have used the Sky pen to take notes in several situations, including consulting assignments with two agencies. Because you can record audio while you are taking notes, it is very easy to go back and listen to the conversation taking place when you wrote the note. I find that, because of this function, I listen more carefully while taking general notes. I can always go back and listen again to the conversation to pick up any details I might have missed. I have noticed that the audio picks up the sound of the pen writing on the notebook, which is a little distracting.

After you’ve written something, simply touching the Sync Now button immediately pushes the data to your Evernote account. If you don’t have a wireless connection available, you can still write and capture data. The Sky syncs up the next time it connects to a wireless network. Also, since it’s Wi-Fi enabled, software updates are pushed to the pen wirelessly.

This could be a good solution for producers to use in a meeting with prospects or clients. I would recommend you tell them you would like to record your conversation “to make sure I don’t miss any important details.” Your notes can then be converted into an electronic version and included as part of that client’s file.

Have you tried a Livescribe smartpen? How do you currently handle taking notes when you’re meeting prospects or clients? Let me know.

15% off any Livescribe pen

I’ve set up a special deal where you can get 15% off your purchase of any Livescribe smartpen. Just click here to get started.