Home > TechTips > How to Save A Water-Damaged Phone

How to Save A Water-Damaged Phone

It’s a moment of terror when you watch your phone fall into any kind of water. Read my wife’s story of how she saved her phone. I hope her story will help save your (or a friend’s) water-logged phone. 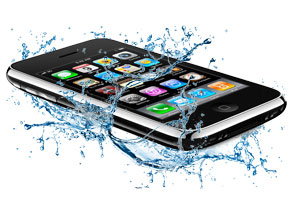 How I Saved My iPhone After It Went Swimming

Okay, this may qualify as bragging…

A couple of months ago I was getting a pedicure and accidentally (duh) dropped my iPhone into the tub of water. It was like watching a scene in slow motion. I saw it start to fall and tried to grab it; time slowed down as I saw it plunge into the water while my hand was reaching out to try and prevent what in my mind I knew was going to happen.

I was not happy, to say the least. Crushed is more like it. And since I am waiting (not so patiently, I might add) for the 5 to come out, I didn’t want to get a new phone yet as it requires a new contract plan with AT&T. In fact, I had decided to forego the 4S (which I really wanted because it has a better camera) in order to get the 5 (I’m assuming the camera will be better yet). So the whole phone in the water thing was a bit of a crisis.

But I came home and dutifully did what I thought I remembered should be done if ever a catastrophe should occur (and this qualified, IMHO). I found a bag of rice (had a few weevils in it but I figured that wouldn’t make a big difference — and given how much I cook I wasn’t surprised). We had just gotten one of those FoodSaver vacuum seal machines so I thought, why not? I got the little container and filled it with rice, put in my iPhone and sucked all the air out. I put it aside for about a week (since I thought it was dead anyway). I eventually dumped the rice out as I needed the container back and set my phone aside (RIP).

Fortunately, I had a friend come to my aid and loan me his old 4. (Good Samaritan that he is.)

There’s a new cell phone repair shop (cleverly called CPR) that had just opened up in town so I took my phone in this morning to see if I could sell it for parts. The guy said he didn’t buy phones that had water damage but he’d look at it any way.

When he opened it up he notice a grain of rice and said I had done the right thing by putting it in rice. He asked me how long I had left it in there and then casually said most people only leave it in rice a few hours because they’re not patient enough but it really needs to be in at least 3 days.

Then he said if I hadn’t told him it had been dropped in water he wouldn’t have believed it. He said my phone was in perfect condition. No corrosion (which is what the problem is when water is involved) and that probably vacuum sealing it had helped as well.

He said it needed a new battery ($55) and he thought it would work fine. He fired it up and I have to say when the little Apple logo lit up, so did my heart (trust me, I’m not being melodramatic here).

I was able to sync it on my Mac so all my data is up to date and everything is working perfectly. Transferring sim cards was the last step and now I’m back to my old phone!

I’m still eagerly waiting for the 5 to come out. But I’m thinking about getting a waterproof case when it does…